As well as attending the History of Medicine in Southeast Asia Conference, whilst I was in Siem Reap I did a little sightseeing. I visited some of the temples around Angkor Wat, including Ta Prohm. Built in the 12th and 13th centuries, it is best known today for its cameo in the Tomb Raider film. The remains of the temple complex are enta 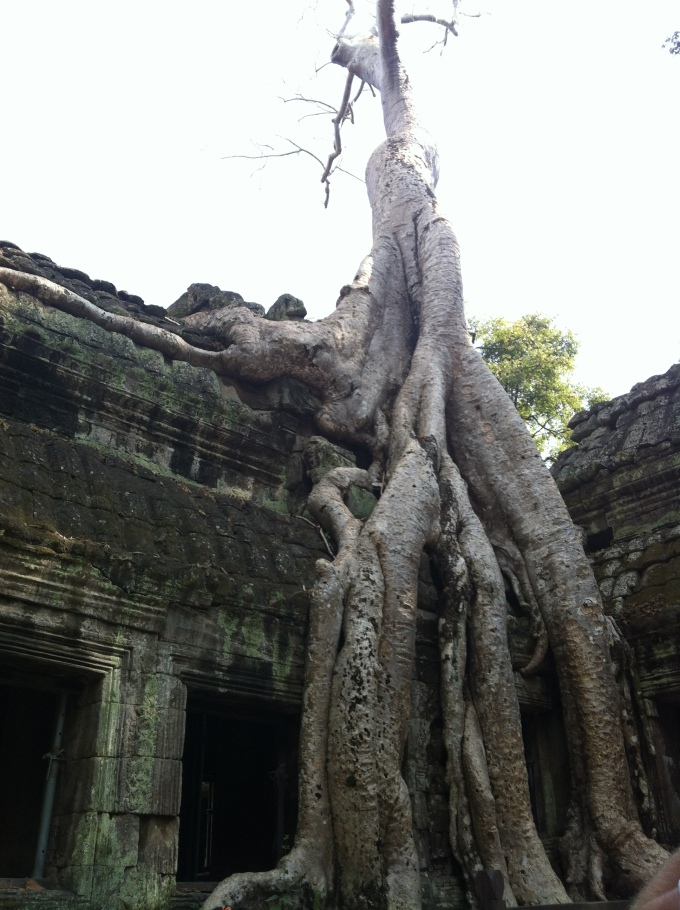 ngled with the roots of numerous large trees, tetrameles nudiflora. As much as its cinematic fame, it is this entanglement of a human construction and monumental plant-life that makes Ta Prohm such an attraction.

Visiting Ta Prohm got me thinking about the idea of ‘natureculture’. The term has been used by environmental historians and others to highlight that the separation of the human domain of ‘culture’ from that of ‘nature’ is artificial. Thinking instead about ‘natureculture’ means acknowledging that human activity is always predicated upon interactions with ‘natural’ things. It also draws attention to the ways in which those natural things themselves shape human activity. In other words, human endeavors are never outside of ecological processes, but are one force within them.

Ta Prohm is a jaw-droppi

ng example of this entanglement. Tree and temple are inseparable. Tourists come to marvel at the ways in which plant and human life have become so completely intertwined. The enmeshed roots and stone mean that preserving the buildings means preserving the plants. Both are now buttressed by scaffolding. These recent interventions are not what people have come to look at. They are nevertheless, ubiquitous and essential.

The visible attempts to preserve Ta Prohm remind me that naturecultures are inherently historical. They are subject to change over time. Trees grow and die. Stones get displaced and erode. The scaffolding and wooden walkways that have been put in place to protect the site and enable people to visit with a minimum of impact, are also an attempt to suspend the site in a moment in time. An attempt to press pause on naturecultural change. But these interventions 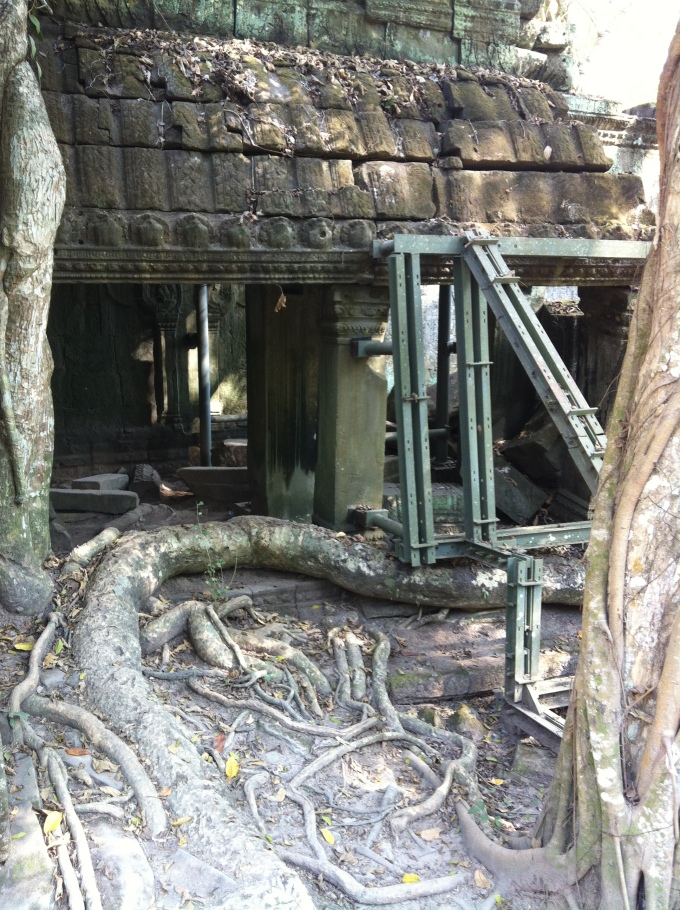 are in fact additions to the natureculture. If they are left in place long enough, eventually they too will become eroded, rusty, rotten, entangled in tree roots.

Walking around Ta Prohm you have to ignore all these recent interventions if you are to imagine it as a pristine ruin. And this romantic sensibility is no doubt part of Ta Prohm’s draw. This is a popular natureculture in that it is an attempt to artificially preserve the temple as an unchanging artifact frozen in the past and to make it accessible

to gawking tourists, like me. But when the infrastructural interventions necessary for maintaining this aesthetic are brought into focus, the site becomes a reminder of the temporal dynamics inherent in the concept of natureculture. It is a reminder that all human works are embedded in the natural world and subject to changes that are beyond human control.

In one of the quieter corners of Ta Prohm I saw that somebody had attached a red, heart-shaped pad-lock to a still thin tree root. No doubt, this was some loved-up couple making a gesture to memorialize their unending love for one another. Of course, if it is not first removed by one of the temple’s human custodians, over the course of the next few years it will be smothered by the growing tree and disappear from view. I’m not sure that was the image that they were going for.