Total war was a more-than-human phenomenon and during the Second World War a variety of animals were mobilized and killed. The Burma theatre was no exception. I was recently reminded of this when a couple of friends shared a reprint of an article celebrating the war work done by carrier pigeons. 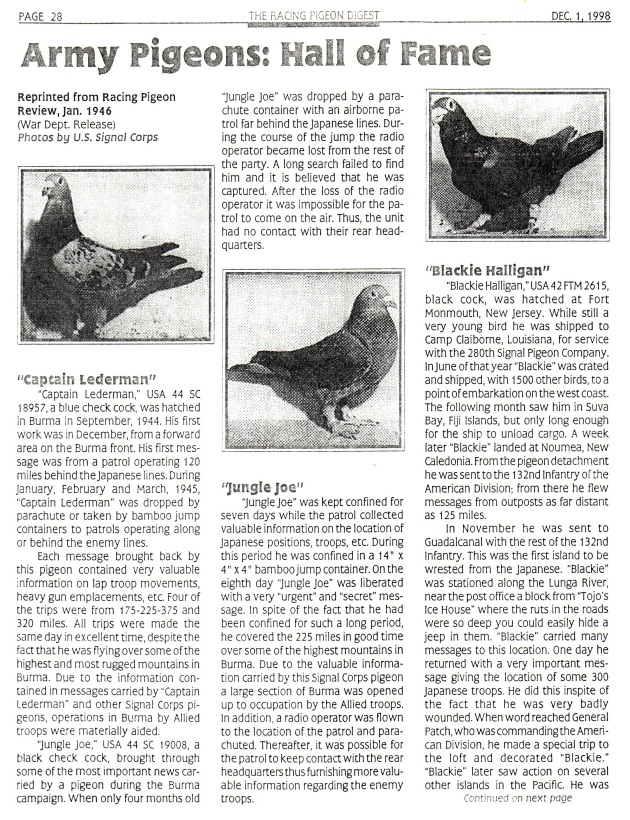 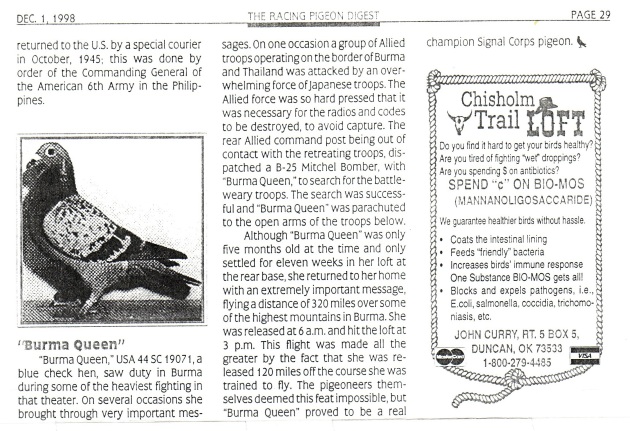 The article details the feats of these birds, which were parachuted (literally) into difficult environments to keep lines of communication open over Burma’s mountainous borders. These were not the only animals whose exploits in the retreat from, and re-conquest of, Burma have been remembered. There were the mules who lugged equipment and supplies for the Chindits. They had their vocal chords cut so that their braying wouldn’t give away their position to the enemy, although this caused unforeseen logistical problems as the mules could no longer communicate with one another. Famously, timber elephants helped transport refugees fleeing the Japanese army across the border to India. After this arduous journey the elephants were then mobilized by the allied forces. Footage of the dramatic escape has been made available by University of Cambridge, with details of the actions of Gyles Mackrell, known as the ‘Elephant Man’.

But as well as animals being deployed for human uses, animals acted on their own. Two apocryphal stories illustrate this. In the chaos of the retreat, some of Rangoon Zoo’s animals were released. When British soldiers returned to the abandoned city following Japanese defeats, some reported finding former zoo-residents in usual places; including an orangutan who had taken residence in a home in the north of the city. More gruesomely, it was claimed by a naturalist serving in the British forces that following a defeat on Ramree Island almost one-thousand fleeing Japanese soldiers were attacked and eaten by saltwater crocodiles–although the veracity of this story is questionable. Whilst both cases are supported by scant evidence, they both appear in eye-witness accounts published by soldiers. They demonstrate the extent to which animal agency was used to show the disorderliness of warfare, how it upset the ‘natural’ order of human supremacy. Non-human apes moved into downtown apartments. Crocodiles massacred soldiers.

Stories about animals in war were used at times to give meaning and provide reassuring order to events. Human mastery over trained animals such as elephants and pigeons could be celebrated as a continuity surviving even in the extreme circumstances of war. At the same time, stories about animals in war were used to illustrate brutality and devastation. The confinement of the imperial zoo was undone, wild beasts occupied the city, rapacious reptiles lurked.