Whilst I was doing some research in colonial-era magazines, I stumbled across this 1930s advert in to: te’ yei: (progress) magazine for a book promising to teach people the skill of hypnotism. Costing just three rupees, the seller generously offered to refund any purchaser who found that they could not ‘master the science’. 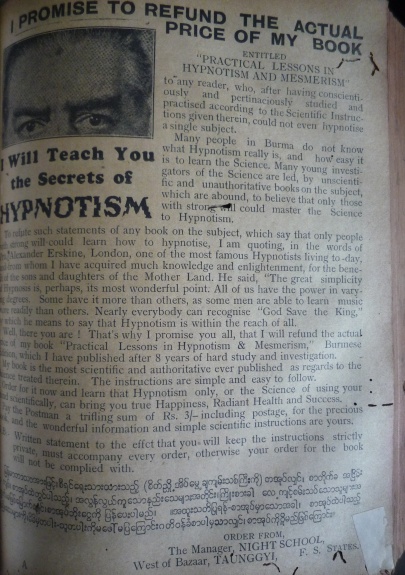 Learning hypnotism—or, as the advert described it, ‘the Science of using your mind scientifically’—could bring the reader ‘Happiness, Radiant Health and Success’. One of the things that I found interesting about this advert was how heavily the author attempted to emphasise that it was a science. They lamented that in Burma people were ignorant of hypnotism, having been given the false impression that it could only be practiced by those with ‘strong will’. The author blamed ‘unscientific and unauthoritative books’ for this misconception.

In a fascinating article, the historian Waltraud Ernst showed how hypnotism was used by a mid-nineteenth-century imperial surgeon in India as a way of rendering patients insensible during their treatments. Her article goes on to show how, because of associations with Indian religiosity as well as the rise in the use of ether as an anaesthetic, it was eventually deemed unscientific. This advert is an example of hypnotists attempting to reclaim the status of a science in the early-twentieth century. In this attempt, the Indian origins of the practice have been forgotten. Instead of representing it as a practice emanating from Asia, the author claims authority from learned people in Europe. The advert refers to the work of Alexander Erskine, ‘one of the most famous hypnotists living to-day’ and ‘from whom’—the author boasted—‘I have acquired much knowledge and enlightenment, for the benefit of the sons and daughters of the motherland.’ Even in an advert flogging books on hypnosis we can see in operation a logic of development that implicitly saw Europe as the source of scientific modernity.

A few months later, a second advert was published that attempted to translate the terminology of hypnotism into Burmese. But I’ll save that for a future blog post…